If you are being accused of committing a crime against the government, for violating the U.S. Constitution, or your crime rises to the level in which a federal court would need to be involved, you are likely facing charges for a federal crime.

These types of cases are often considered to be more complex because they involve myriad intertangled laws that are in and of themselves complex in their wording. Federal investigators take months, sometimes years, to build cases against defendants – all that time gathering evidence and bolstering their case.

Attorney Ann Fitz has dedicated her 20-year career to helping clients defend their rights, best interests and futures in federal cases. Her experience handling a range of federal crimes and her client-centered, zealous approach make her a strong ally when it comes to seeking and securing the best possible outcome in these types of cases.

Arrest for a Federal Crime

An accused individual is arrested by the federal agency which has subject-matter jurisdiction over the offense (such as the DEA, FBI, INS, or ICE). Initially, the person arrested will be held for some hours by the arresting agency.

Once the arresting agency processes the individual for arrest (and interrogates or attempts to interrogate the person), the arresting officers turn the person over to the U.S. Marshals, who have the responsibility to house persons arrested for a federal crime.

The Marshals will usually house the person in a metropolitan correctional center. The person is kept in the Marshals' custody until he/she is bailed out, the charges are dismissed, or the person is sentenced.

If the person is sentenced to a term of imprisonment, the responsibility for housing the person passes to the Bureau of Prisons (BOP).

After being arrested and turned over to the Marshals' custody, the individual is taken before a U.S. Magistrate Judge to be arraigned on the first available business day.

Arraignment for a federal crime typically happens within 48 hours of arrest but can occur up to 5 days later if the person is arrested on a Thursday and turned over to the Marshals on a Friday before a weekend with a Monday holiday.

Arraignment consists merely of the defendant being told of the charges in the Indictment and of the defendant's entry of a plea (not guilty). At the arraignment, the individual will be interviewed by someone to determine eligibility for an appointed attorney. Unless the person has already hired an attorney, Federal Defenders represent everyone at the initial arraignment.

At the arraignment, the defendant will be informed of the charge(s) against him or her; legal counsel will be appointed if the defendant cannot afford to hire counsel and bail will be set if the government does not move for detention.

After the arraignment, the defense counsel will be given a date to return to court for a preliminary hearing in approximately ten days.

Bond for a Federal Crime

In the federal system, you cannot be released on bond until you are brought before a Magistrate Judge, who sets the conditions of release, including a bond amount.

Usually bond will consist of one of the following, or a combination thereof:

If the defendant fails to appear for any required court appearances or violates the conditions of release, the court may revoke the bond, giving the government the posted money or a lien on the title to the posted property.

If the defendant satisfies all conditions of his/her bond, the bond will be discharged, and the money returned or property lien released at the conclusion of the case.

Motions are requests for the court to grant relief. The most common motions are:

Other common motions ask the court to exclude or include certain evidence under the rules of evidence.

A defendant is entitled to receive a copy of any evidence the government is going to use against him/her at trial, including oral or written statements the defendant made to agents, tangible objects, scientific tests or reports which the prosecutor intends to use in evidence, and witness statements.

The Due Process Clause of the U.S. Constitution provides that the government must turn over any evidence in its possession which is tends to prove a defendant's innocence (this is also mandated under the U.S. Supreme Court case Brady v. Maryland), as well as evidence which might cast doubt upon the credibility of government witnesses (such as inconsistent statements, evidence of bias, or motive to fabricate).

Plea to a Federal Crime

Because the government has a staggering conviction rate of approximately 95% of the cases it indicts, entering a plea to the charges in the Indictment is an option that many defendants explore.

An individual is usually looking at less time when he/she enters a plea, and, in a multi-count Indictments, the government will require the defendant to plead to only 1 or 2 counts and dismiss all the other charges.

The plea hearing is also called a Rule 11 hearing in federal court. Generally, the defendant enters a guilty plea under a negotiated plea agreement.

The plea agreement outlines the government's recommendations and typically contains an appeal waiver. Although it is rare, it is sometimes possible for a defendant to tender a “nolo contendere” plea. This rare plea can be done only with special permission from the court.

Trial for a Federal Crime

If a defendant does not enter a plea to a federal crime, the case will proceed to trial.

The Fifth and Sixth Amendments to the U.S. Constitution provide that any person charged with a crime has the following rights:

The government has the burden of proof, so the trial begins with the prosecution presenting its case against the defendant, presenting their evidence in the form of witnesses, documents and other physical objects, such as drugs, weapons, etc.

It is then appropriate for defense counsel to move for a direct verdict, which is a request for the judge to find that no reasonable jury could convict the defendant on the evidence presented by the government. If the judge agrees, he or she will enter a judgment of acquittal.

If the judge disagrees, the defendant then has the right to present evidence for its defense (or to decline to do so). The process is similar to the government's presentation of their case.

Once the defense rests, the government has the right to present a rebuttal to the defense's evidence.

After a plea is entered, the case is referred to a U.S. Probation Officer for the preparation of a presentence investigation report (PSR). The PSR is an in-depth report prepared for the judge, which details the defendant's background and calculates the recommended sentencing guidelines range.

Sentencing is typically conducted 1-3 months after entering a plea.

Sentencing for a Federal Crime

Federal crime sentencing is determined by two things: (1) the statute of conviction, which sets the maximum penalty in the form of a fine or imprisonment; and (2) the federal sentencing guidelines.

The federal sentencing guidelines are a series of sentencing rules established by the U.S. Sentencing Commission. The guidelines are set up on a scoring basis and take into account the nature of the offense and aggravating and mitigating factors of the crime. This "score" results in the offense level. 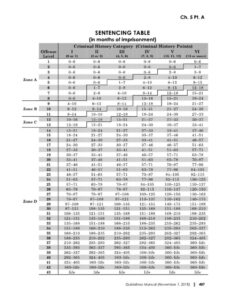 Once the court has calculated the defendant's offense level and his/her criminal history category, a presumptive sentence range is determined. At that point, the judge is authorized to depart upwards or downwards from the presumptive range if there are circumstances about the defendant or the crime that were not adequately considered by the guidelines.

The judge's decision whether to depart is subject to the court's discretion and typically cannot be reviewed on appeal, although the actual calculation for the presumptive guidelines range can be appealed.

Points can be added if the defendant was on probation or parole when he/she committed the offense conduct, or if he or she was recently released from custody when the offense was committed. The length of custody greatly increases along with the criminal history category.

Serving a Sentence of Imprisonment

Once the defendant's sentence has been announced, the defendant is either taken into custody by the Marshals or allowed to surrender at their custodial institution on a certain date voluntarily.

There is no parole in the federal system, but if a person behaves well in custody, he or she can receive 15% credit for every year he or she is to serve. That means that a person will typically end up serving 85% of his or her sentence.

There are programs that a defendant may qualify for, such as RDAP (Residential Drug and Alcohol Program), that will reduce an inmate's sentence by 1 year upon completion.

Generally, a defendant is placed on a period of supervised release after his/her release from prison, as determined by the sentencing judge.

Supervised release is similar to probation, and if the defendant violates the terms (including committing a new offense), he/she can be returned to prison for up to the maximum of the term of supervised release.

Get Answers To Your Federal Criminal Defense Questions

Call today to schedule an appointment with federal criminal defense attorney Ann Fitz by calling her office at 561-932-1690.